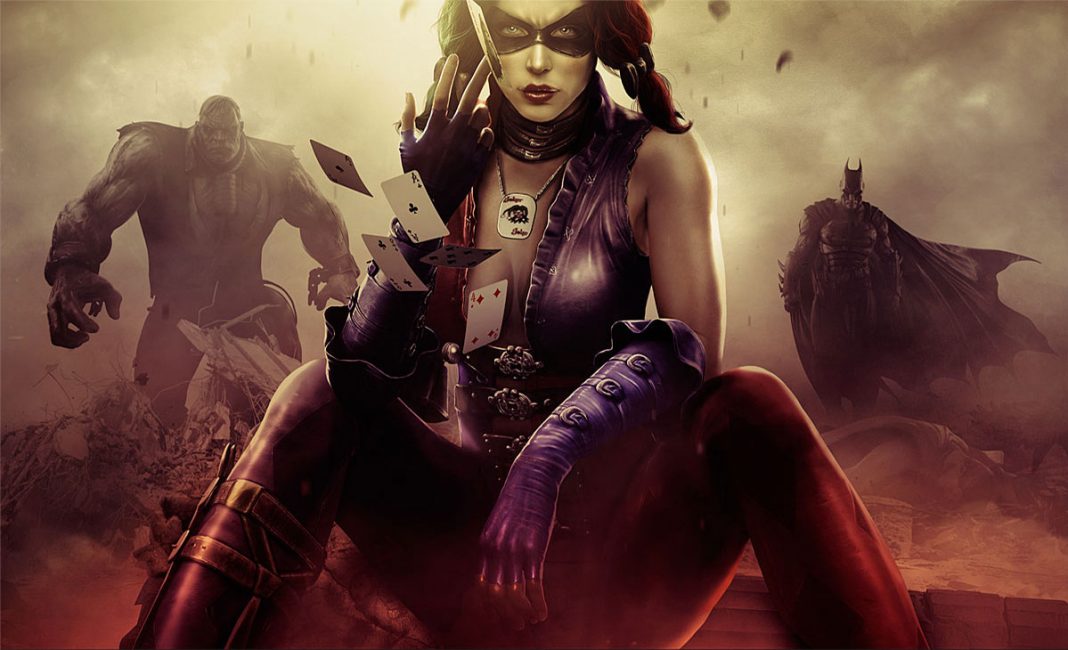 If you are a fan of the Batman universe – Especially Batman: The Animated Series TV series from the 90’s, chances are you will have come across Dr Harleen Frances Quinzel, the Arkham Asylum intern Psychiatrist turned high-spirited villainess and devoted lover of The Joker, known as Harley Quinn. Armed with a beautifully crafted and intriguing origin story, she creates a rare opportunity for further depth to what is arguably Batman’s greatest and most mysterious nemesis, The Joker. You would think this would be a winning combination but Harley Quinn has caused a great divide between the fans and many hold very strong opinion of her on both ends of the spectrum. She’s a lot like Marmite it seems, you either love her or hate her. Let’s try to figure out why this is, shall we? 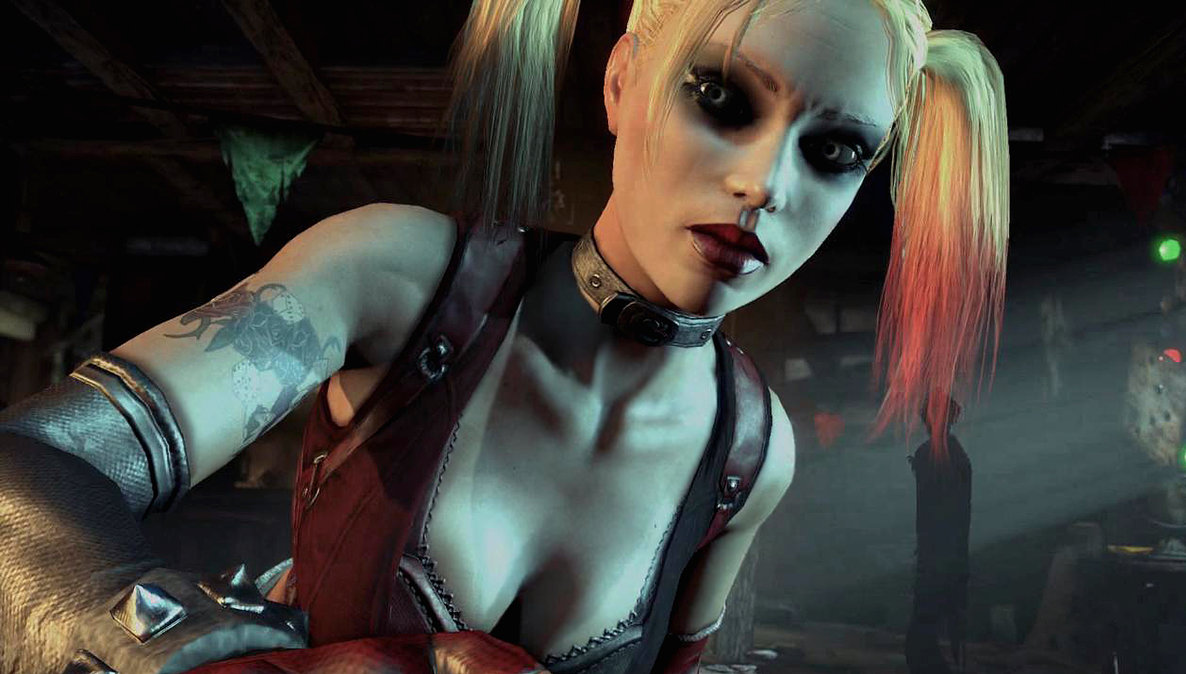 Harley Quinn is portrayed as a fun, larger-than-life, young woman with a spunky attitude, who is often a little goofy and silly. As Dr. Harleen Frances Quinzel, she soon becomes besotted by The Joker after being assigned to do his psychiatric treatment at Arkham Asylum. Becoming utterly fascinated by her patient leads to her falling madly in love. This devotion clouds her judgement, resulting in her giving up her job as a psychiatrist and taking up the position as The Joker’s faithful sidekick and lover, Harley Quinn. As her costume was largely based off of the traditional jester attire, her villain name is particularly fitting as it’s a play-on-words of ‘Harlequin’.

Her new found love drives her to help The Joker escape Arkham on multiple occasions and commit herself to help him in all his plots and schemes, tending to his every whim. She is driven insane by the unspeakable acts he commits over Gotham and sees everything he does as a big joke, even when his actions put her life at risk on a regular basis. She’ll simply do anything for her Puddin’ even though the feeling is anything but mutual. However, it’s these very personality traits that many people criticise the character for. Believing her to be too much of a distraction from the eternal struggle and cat and mouse relationship between Batman and The Joker. Many view her as an annoyance that’s too dizzy, docile and ultimately an unfit parter for The Clown Prince of Crime. 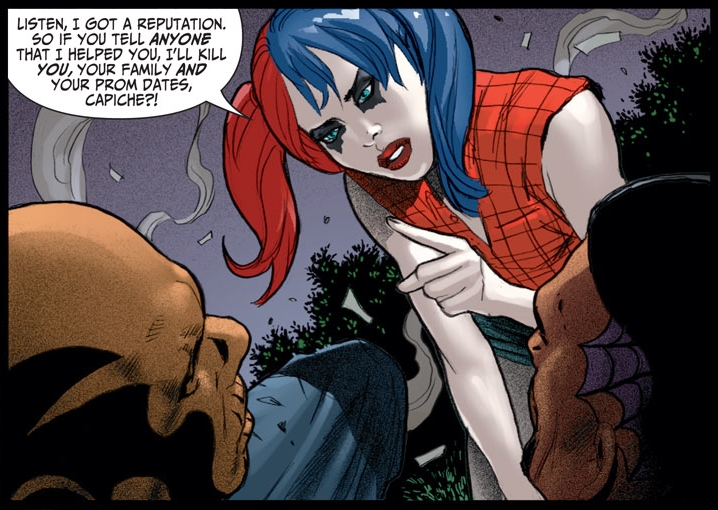 Another area of contention to consider is that Harley first appearance was in Batman: The Animated Series on TV back on September 11th 1992, in the episode ‘Joker’s Favor’. It wasn’t until later that she was adapted into DC Comics, first appearing in The Batman Adventures #12 in September 1993. This completely reverses the more traditional comic-book to TV integration method which many comic-book purists and fans are accustomed to. This is a source of great friction for many fans. Some feel that Harley was purely created for TV and therefore deem her unworthy of a comic-book home and popularity.

It is argued that Harley is not enough of a strong female character for today’s society, mainly because of the way she is so poorly treated by The Joker. Harley is caught up in an abusive relationship. She longs for attention and yearns for the same level of unwavering love she has for The Joker but is constantly neglected and denied it. At times, this can feel incredibly tragic. However, I suspect this treatment is largely because The Joker is not capable of the conventional sense of intimacy because everything about him is unconventional.

OK, all this Harley bashing is making me weak, bring on the positive aspects! 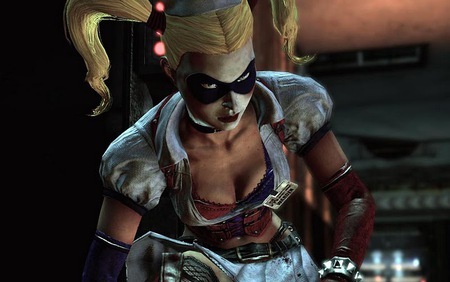 Sure, Harley may not be your conventional, powerful and independent woman that we all long to be a little bit more like when we watch girls kick butt in the latest comic-book blockbuster but there in lies her charm. She’s not as sassy as Catwoman or as serious as her BFF Poison Ivy but Harley is unique, loyal, smart and charming and knows exactly how to use her assets to get what she wants. She is also clearly quite happy, free and empowered in her choice of life with The Joker, arguably much more so than before she joined the ranks as one of Gotham’s most wanted. Assisting The Joker and helping him to foil The B-Man is her empowerment and just because she isn’t out there leading a female empowerment group, doesn’t make it any less empowering to her as empowerment is a very personal thing. She isn’t a cookie-cutter character with sophistication and grace but she’s strong in her own right and irrefutably relatable because she’s so human.

I’m not going to sit here and say their relationship is a bed of roses full of happiness and health because it isn’t but then again, is there ever such thing as a perfect relationship? To those who doubt whether she’s good enough to be considered Joker’s equal and are perplexed over why he’d even give her the time of day, it’s worth remembering that The Joker doesn’t really respect anyone but himself and Batman and that he considers everyone else inferior. In addition to this, surely the fact she’s still alive is the biggest testament of all that he truly values her? If nothing else she makes him laugh and really that’s all he needs. That and someone that will compliment his madness but never challenge it or his ego and Harley does this beautifully. 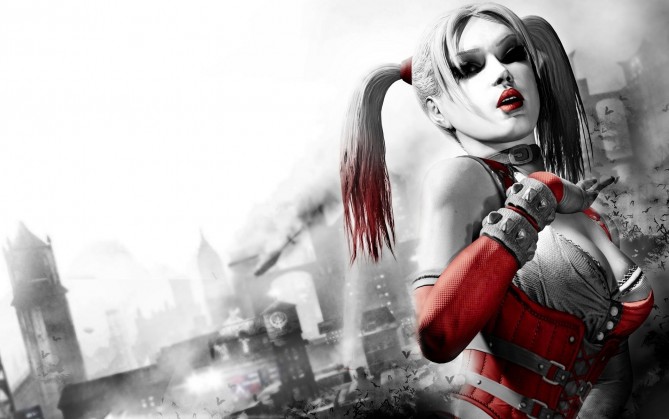 The other cool thing about Harls is her costume design, showing not all female villains have to be scantily to be sexy – Before you say it, yes I know the new DC 52 Suicide Squad costume left little to the imagination in this department but I firmly believe DC were just having a bad day when that design was agreed and they’ve regretted it ever since! Haha. Now that I think about it, if I was a newcomer to Harley Quinn and only had the new DC 52 Suicide Squad Harley Quinn to go by, I’d probably hate her too! That’s a real shame too because that depiction destroyed everything Harley stands for in my opinion and well the less said about the costume, the better! Her classic character design however, is a stroke of sheer brilliance and has inspired the creation of endless cosplay variants the world over which is surely something to be applauded. Her likeability factor is through the roof too. How can you not like a young lady who loves toys, goes about town on roller-blades to take her two pet hyenas for a walk, plays pranks, loves to enjoy life, always seeing the funny side of it and uses a giant hammer and a cork gun as weapons?

At the end of the day Harley is a brilliantly developed and interesting character. Whether or not you love her or hate her really comes down to personal preference and I don’t think that will ever change. If you like her then great and a big high 5 to you, if not then that’s cool too. I have a feeling Harls will be around for a long time to come and probably go through many more hideous costume changes that will make many fans weep. One thing is clear though, she will always be one of the most interesting characters DC have ever produced as evidenced by the polarizing effect she has on the fans. I thank Paul Dini and Bruce Timm whole-heartedly for creating her and bringing her unique brand of chaos into our lives.